The Métis Betterment Act was a groundbreaking legislative step for the designating land for Alberta’s 12 Metis Settlements in 1938-39; with the people of each area forming their own elected governing councils. These Settlements evolved, as the Métis people were feeling capable and motivated to exercise self-determination and self-governance of their land base.

Meanwhile, the provincial government still retained significant control over the management of the settlements. While Settlement councils were locally elected, the province was making unilateral decisions on behalf of all the settlements, including the closure of Wolf Lake, Cold Lake, Marlboro and Touchwood Lake Metis Settlements through legislative changes. They were also caught misusing the Métis Betterment Trust.

On February 5, 1974, a statement of claim was filed in Supreme Court of Alberta for revenues from oil and gas development, “Keg River Metis Settlement Association v Her Majesty the Queen in Right of Alberta action.” 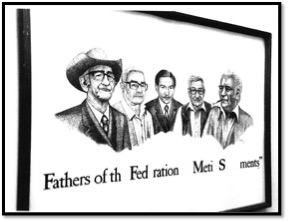