On Friday, July 13 a crew of firefighters from the East Prairie Metis Settlement were deployed to Quebec, where more than 60 wildfires have been burning for the last several days. Firefighters Terrell Laboucan, Glen Giroux, Albert Payou, Brayden Desjarlais, George Tompkins, Jamie Emard, Alex Desjarlais, and Leader – Cory Bellerose, joined over 200 firefighters from across the Canada and parts of the United States who have been sent to Quebec, and parts of Ontario, to help contain and control wildfires. The crew from East Prairie had no second thoughts about stepping up to assist, but the scale of the firefighting effort was certainly apparent to them. Crew leader Cory Bellerose said, “In all my 15 years of fighting fire with East Prairie it’s surreal that we’re being sent to help out Quebec with their fire situations.”

The Metis Settlements General Council took to Twitter this morning to show support for these brave firefighters. The tweet garnered a lot of attention, with many people expressing their support and appreciation for the courage and service of these young men. Even Premier Notley herself, several members of her cabinet and MLAs, as well as Edmonton City Councillors Sarah Hamilton and Andrew Knack, expressed their appreciation! 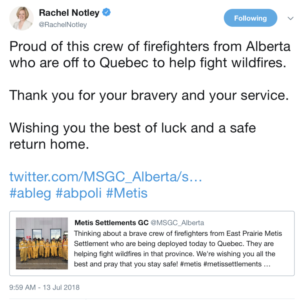 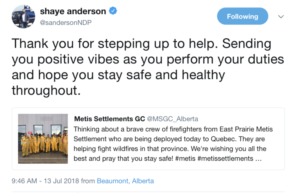 Everyone at the Metis Settlements General Council, and so many others, are keeping the safety and health of these brave firefighters in their thoughts and prayers. We are very proud of you and look forward for your safe return home.